Subjects in RDA and RIMMF

Subjects–what a thing is about–are, at least from the user's point of view, one of the most important bits of data that we add to our descriptions of things.

In RDA, it seemed that subjects were originally designed to be handled by the four COEP entities–Concept, Object, Event, Place. We had included support for these entities in RIMMF, even though no elements were assigned to them, from the very beginning. But, both in the Toolkit and in the RDA Registry, these entities never got off the ground.

Eventually, we decided that the concept of subject was far too important to be left out in the cold, as it were, and so we added a generic 'Subject of Work' element to RIMMF about two years ago. This container could support LCSH headings (structured text), and eventually, links to other entities. And later, thanks to a suggestion from Gordon Dunsire, we added a complementing inverse 'Subject Of' element.

Now, with the April 2015 update to the Toolkit, and subsequent June update to the RDA Registry, 'Subject' has officially arrived in RDA. Hurray!

In the Toolkit, subjects are handled by the new Chapter 23, and supported by the list of relationship designators in the new Appendix M.

The 'new' subjects in RIMMF

In RIMMF3, beginning with update 150801, the new subject elements will mesh seamlessly with our old one(s).

Before this update, RIMMF subject data contained classification and subject heading strings (structured text), as in this snippet:

with an occasional link to a Person, as here:

After the update, RIMMF's 'Subject' becomes RDA's 'Subject relationship' and now supports a rich array of more specific relationships (including inverses for each): 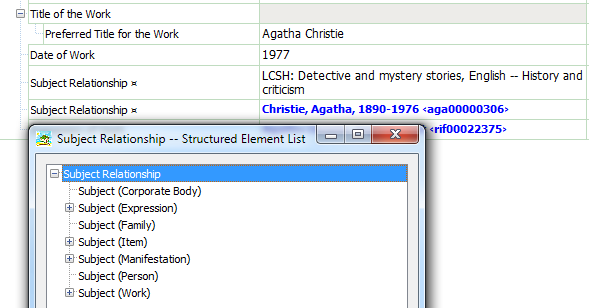 And thanks a bit to good design, and no doubt also to serendipity, all RIMMF existing 'Subject' elements will immediately and automatically update to the new RDA 'Subject relationship' as soon as the old data is loaded into the new RIMMF.

Adding a more specific subject relationship to an existing subject is as simple as clicking on the label to open the dropdown list and selecting the relationship you want to update the existing one to (and of course, you can do the same thing by pressing F7 to display the structured list of relationships, as shown in the previous screenshot); 'Subject (Person)' is the one to use for this example.

And once that's done, you can double-click on the link, and visit Agatha's record to check that the appropriate inverse relationship has been added,