For versions of RIMMF dated on or before 170614 use these instructions. 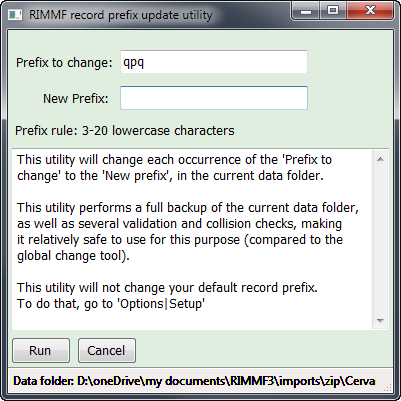 When the updater is finished, it will display stats on the number of identifiers that were modified, and then RIMMF will rebuild the EI for the data folder (so that it can re-index the new identifiers).

When the utility is first launched, it will insert the current record prefix into the top box. Overwrite that if you want to change a different prefix.

If, during the update, the utility detects that a requested change would create a collision1), the update will fail. The utility will report a list of the record identifiers in question.

Before the utility begins, it makes a copy of the current data folder. The location of this backup is in the

subdirectory of the current data folder.

To get a list of prefixes used in a data folder, go to the EI, sort on the shorturi column, and note the prefixes that appear.

1)
i.e., changing an identifier prefix in a record would create an identifier that already exists in another existing record
howto/changeprefix.txt · Last modified: 2021/12/29 17:30 (external edit)
Back to top