The current version of RIMMF is: 3

Version information is available in the software under the Help menu, by selecting 'About'.

The third line in the resulting pop-up contains a detailed release number:

Check the date from your 'About' results and compare it to the date at the top of the download page.

If this number in your copy of RIMMF is less than the date on our wiki, then a more recent update is available. (In fact, check the download page anyways, since sometimes, due to a cascading series of bugs

the results of the 'Check for updates' option did not work properly in some releases).

Note: Although the detailed version number is a date (in YYMMDD format), it only approximately indicates the calendar day on which an update is released. For example, we might release an update with a version number of 130311 on March 24, 2013. The important thing is whether your About version number is less than the one on our website.

How to get an Update

You can check for the latest update by using the so-named menu option under the Help menu: 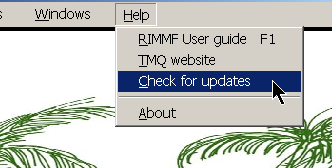 If you do not have the most recent update, you will be told which update is currently available, and given the option to see the details of the changes in the update:

If you click <Yes> you will be taken directly to the wiki page describing the changes for this update; this page also provides a link to the Download page; follow the instructions there to download and install the update.

If you click <No> you can proceed directly to the Download page, without checking for the changes.

You can learn more about our updating process in our “Learn about … ” section, under RIMMF Updates

Its hard to put dates on things because of the nature of this project. RIMMF is constantly under development, because our goal is not to make a product, but to explore RDA (which is also undergoing development, by the way, at the same time). So the names 'RIMMF1', 'RIMMF2', 'RIMMF3' do not really correspond to different pieces of software so much as to points in time where we decided we had taken an idea as far as we could, and then needed to wrap that up before we started off in a different direction.

What follows, therefore, is but a brief project timeline

RIMMF1 was 'unveiled' at American Library Association conference in New Orleans, June 2011. It was some time before a wiki began to take shape and before the software was publicly available for download, which was in March, 2012. I am not sure when (or if) this version was publicly announced.

We began work on RIMMF3 shortly thereafter, and releases began to appear on a RIMMF3 wiki in November, 2013.